Yikes, I just realized that my last post before yesterday was on April 19!  I didn’t realize how loooong a break I took!   I have to be honest: some of my time off was due to lack of organization – most of my jewelry arrived in Germany jammed inside a million different little boxes (to protect it) inside of many larger boxes filled with books, magazines, clothing, doo-dads, etc, etc, so it has taken ages to sort it all out.  And I’m not done yet :(   Although as annoying as it can be to unpack and sort and organize my belongings, it is like a treasure hunt every day!

Teaser photo (in other words, check back to see more!!) ~ 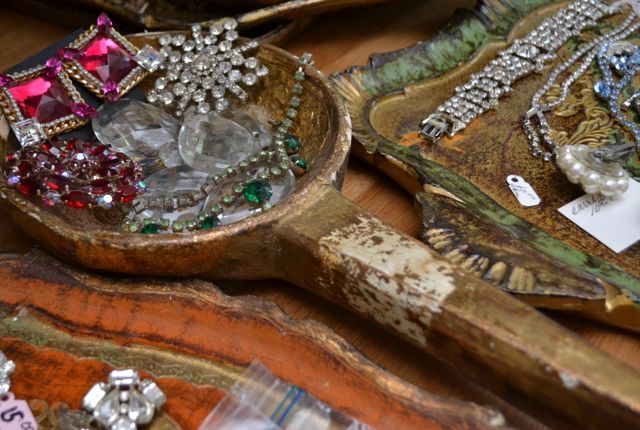 The other reason for my pause in blogging was that I was back in the U.S. for six weeks in June & the beginning of July for my (now) sister-in-law’s wedding in New Orleans and then my own in Minneapolis.  And a short honeymoon (of course!) at my family’s lake cabin in northern Minnesota – where my husband and I did enough flea marketing/antiquing/vintage hunting to result in a treasure trove of jewelry purchases – stay tuned!!!

…and yes, the vintage jewelry (above) is photographed on some of the many, many vintage Italian (Florentine) trays that I’ve been collecting since I moved back to Europe in January!  And YES, this is only a small part of the vintage jewelry that I bought back in the States this summer!!