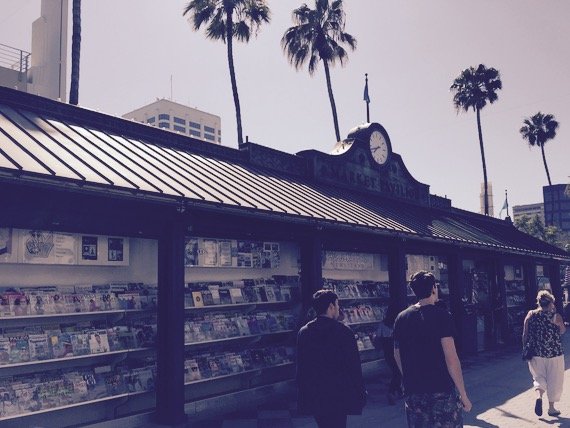 Dipping my toe in the water of blogging again {smile, wink}.   We knew that moving from northern Germany to Southern California would be a huge shift.  But you never think about how long that transition might take in your head.  My husband and I still feel like we’re on vacation here in L.A.  My husband less so, I guess, because he has a full-time job {wink}.  But now that we’ve been living here over a month, we’re trying to get out of our comfort zone a bit and explore the Los Angeles area.

We’re currently living in temporary housing in the Thousand Oaks area.  The neighborhood is called Dos Vientos and it’s absolutely beautiful – surrounded by mountains so that every which way you look is a stunning view.  The community itself is very lush and green (despite the drought) with tons of brilliant flowers.  But it is definitely suburban.

We’ve spent most, actually all, of our weekends so far a bit further east (towards L.A. and civilization) in Westlake Village.  So on Saturday we decided to make the trek into Los Angeles and explore Santa Monica.  We’ve been so frustrated by the traffic the couple of times we’ve driven to and from the airport, that we’ve been hesitant to leave our little enclave northwest of Los Angeles.  But this time we had good luck – we took the Pacific Coast Highway (PCH) and got there in only an hour!

Neither my husband or I had been to Santa Monica in several years, so we did the touristy things – wandering the Third Street Promenade and walking along the boardwalk.  We had fish tacos at Wahoo’s Fish Taco, a great local chain, for lunch and met up with a friend from business school we hadn’t seen in a couple of years.  It was sunny and warm and all around, a pleasant outing.

Here’s a little report on the Third Street Promenade – I had read/heard that it’s full of national chains.  And it is.  But there’s a lovely Restoration Hardware Baby & Child there, and a West Elm.  Both of which I like and neither of which we have in Thousand Oaks.  There’s also a Barneys New York that I didn’t get to go into because no one else in my party was interested.  Next time I’ll go by myself {huge smile}.

Next Sunday we’re making our first trip to the Rose Bowl flea market!!!  Pumped for that!!