Why go:  Ribe (“ree-bah”) is the oldest town in Denmark, dating from AD 700, and the city center is loaded with buildings dating from before the middle ages.

Day 4 was a driving day – we left Sankt Peter-Ording late in the morning on Monday and headed to Ribe.

The main reason for wanting to visit Ribe was to see its astoundingly old and well-preserved architectural landmarks.  Ironically, Ribe is a treasure today because for the last 500 years it has lacked the finances necessary for modernization.  From the 900s to the late 1500s the town was in fact extremely prosperous, being a Viking stronghold and home of a bishop and the Danish royal family.  This meant there was plenty of money to erect a stunning church, significant governmental and royal buildings and beautiful residences.  The prominent architectural style in Ribe is half-timbered buildings.  This is one of my favorite styles.  (Just for fun yesterday I Google-searched images and had a blast looking at all of the lovely pictures!)  Because so many half-timbered buildings have been destroyed by fire (many not making it through the middle ages), they’re rather rare.  (Alas, the downside of building with wood.)  The Normandy region of France has a good number of half-timbered buildings remaining (notably Honfleur and Deauville).  The Scandinavian countries have some, as does Germany, although many in Germany have been rebuilt after the Second World War and while lovely to look at, are not, well, authentic. 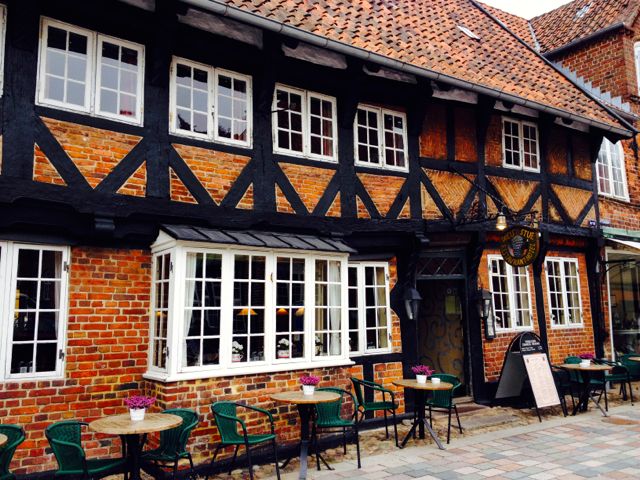 In addition to its famed architecture, we stopped because we thought why not?  Ribe is firmly on the tourist trail and our mantra for this trip was “when is the next time we’ll be road tripping through Denmark?!”  So we decided that Ribe was worth an afternoon. 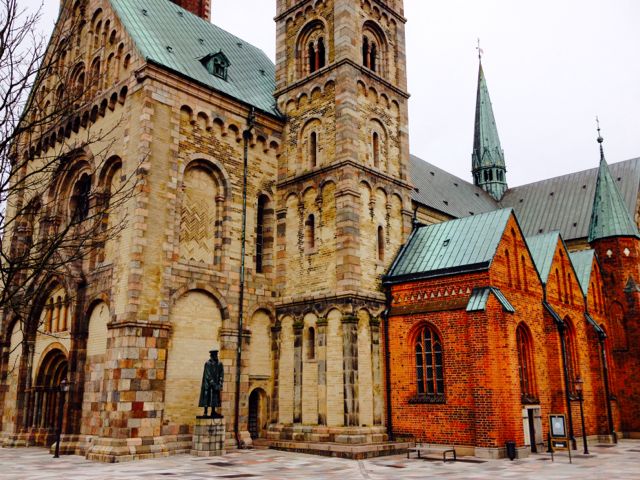 Also of architectural note is Ribe’s Romanesque cathedral, completed in 1134(!!!).  A number of fires burnt various parts of the structure, so as it stands today, the cathedral is a bit of a hodgepodge of more recent construction.  (Note the red brick flanking one side of the building, added after a fire in 1176.)  Nonetheless, the nave remains intact and even additions from the 12th century are pretty ‘authentic’!

As it turns out, Ribe was a ghost town.  It was in the low 40s (F) with whipping wind and rain and we were nearly the only people in the famous town square.  The half-timbered buildings were remarkable, but nonetheless, we walked around town for about half an hour, took a quick spin through the church and headed back to the car.  (Luckily we didn’t find a parking ticket on our windshield, despite the fact that we couldn’t figure out how the ticket machine worked.)

As far as shopping goes, Ribe is very touristy, so there were several trinket shops in/near the square, but I didn’t feel that I needed a “Ribe” cell phone cover.  There were some other shops that had interior pieces, but they mainly had selections of French-looking (but made in China) goods that could be found pretty much anywhere in the world.  There was a cool shop right across the street from the cathedral entrance that exclusively featured handblown glass items – jewelry, statuettes, lamps, chandeliers, wall decor, etc.  As with everything in Denmark, the prices made me think twice, so I escaped without spending a penny (or a Kroner).

We would have made two additional stops on our drive north: at Legoland (yes, Lego® is from Denmark) amusement park and at Herning Museum of Contemporary Art.  Apparently, Legoland is fun for all ages.  Since my husband loved Legos as a kid, we thought ‘why not?’  And from what I’ve read/heard, Herning is a big deal for anyone who’s really into the modern art scene.  My husband and I aren’t fanatics, but we do appreciate good art and we like to visit museums outside of the typical MoMA/Guggenheim/Tate Modern/Centre Pompidou tourist loop.  Unfortunately, both sites were closed.  Legoland for the season (reopening in April) and Herning for the day (closed every Monday).  Boo.

Oh, an important travel note here (because you’re already planning your trip to Denmark, right??): every Danish person we interacted with – even gas station attendants – spoke English.  So while it’s nice to know a few pleasantries in the local language, you can count on being able to get around easily without intensive Danish courses.  Love that.

As always, thanks for reading!