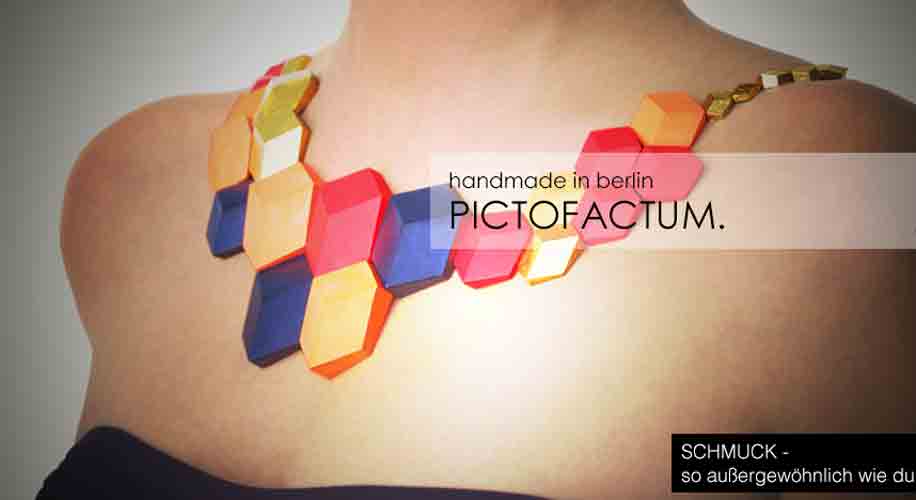 If you follow the international press, you’ve heard that right now Berlin is the epicenter of artistic creativity in Germany – if not in all of Europe.  (I’ve heard tales of creative geniuses working alone for days in basement cellars of old East Berlin factories.  Maybe you have, too?!)  Full of curiosity about the creative scene in Berlin, I was anxious to dig deeper.  So when I met artist and jewelry designer Gitte Nicolaus of Pictofactum at last month’s Blickfang design shopping event in Hamburg, I asked her if she would do an interview for this blog.  (She said ‘YES’!!) 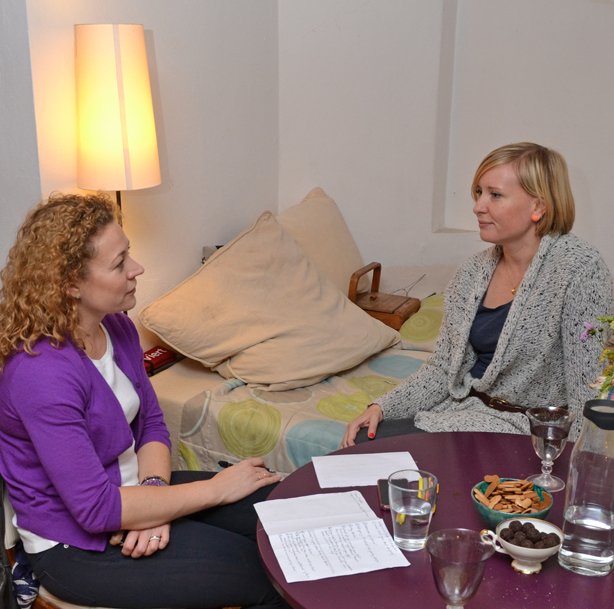 {chatting with Gitte in her studio}

It’s a dreary, cold afternoon in early October and my husband (and this story’s photographer!) and I are headed to the Pictofactum atelier.  It’s located in a new neighborhood, one built years after German reunification.  Rows of 4-story red brick apartment buildings line the main drag.  The taxi stops in front of one such building along the backside of the neighborhood.  Beyond it, there are trees, trails for walking and biking and finally, the Spree River.   We pay the cab driver and are quickly buzzed through first a gate and then the front door of the building that’s home to Pictofactum.   Following Gitte’s directions, we descend a dark staircase and I think ‘a-ha!  Just as I expected!’  As we reach the bottom of the stairs, Gitte welcomes us and leads us into the studio.

Upon entering the workspace, I’m pleasantly surprised to find a warmly lit studio with several artists at work and even the studio dog, Banjo (a Carling-Terrior mix – looks like a sweet pug to me!).   Note: the studio is only half a level below ground, so there are several windows to provide natural light.  No dungeon workspace here!  But there’s certainly something that I was hoping for: jewelry.  Lots of jewelry.  And the tools and materials for creating it.

Gitte Nicolaus is Pictofactum – she’s the founder, owner, designer, craftsperson, marketing and salesperson of the business.  Originally from Rostock, a medium-sized German city just off the Baltic Sea, Gitte moved to Berlin fifteen years ago to attend school for industrial design.  She loved the city (who wouldn’t?!), so after graduating, she went to work for a music company, where she stayed for six years. She enjoyed the industry, she tells me, “but I missed working with my hands.”

So after what she calls a “stroke of luck”, the music company she was working for folded, and she lost her job.  Many a person would have despaired.  Not Gitte.  “I thought, this is my chance!”  That chance was the opportunity to start her own business – one in which she could once again create with her hands.

A year later, Gitte is hard at work realizing her dream.  The challenge at the beginning was to figure out precisely what her business would be.   As a trained industrial designer, Gitte started experimenting with paper and other materials.   Eventually Gitte had her pièce de résistance, and what she thought would be her final product: geometric wall art. 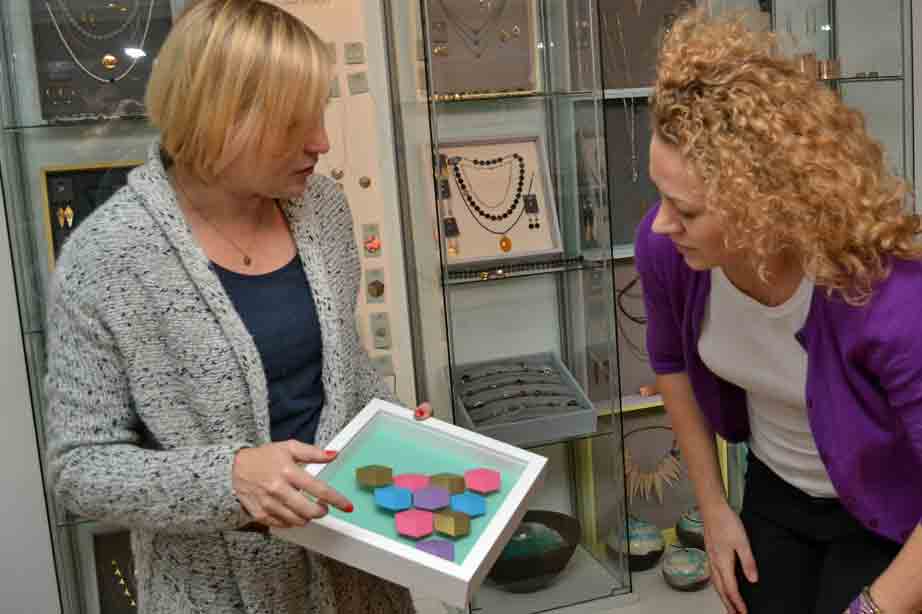 “I love geometric shapes,” she says.  So Gitte began experimenting with grey ceramic powder to create her 3-dimensional figures. Next, she experimented with adding colored pigment to the ceramic mix to add further depth to the objects.  She then began gold leafing the forms.  One of my favorite things about Gitte’s pieces is the fact that they’re multi-colored.  Maintaining the natural grey of the ceramic and adding color only to some of each object’s facets emphasizes their geometric quality, and keeps them interesting! 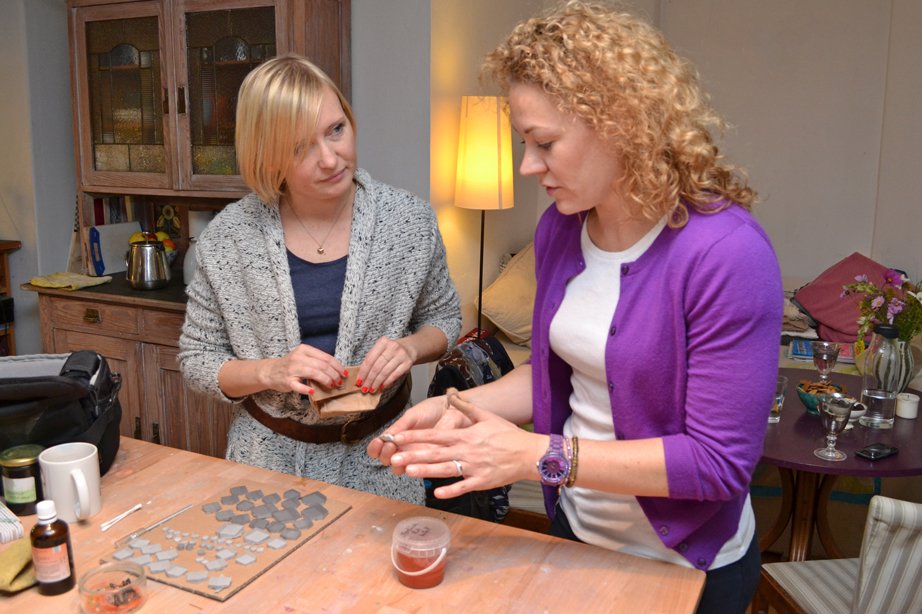 {playing with the product: these gray forms will be transformed into colorful baubles!} 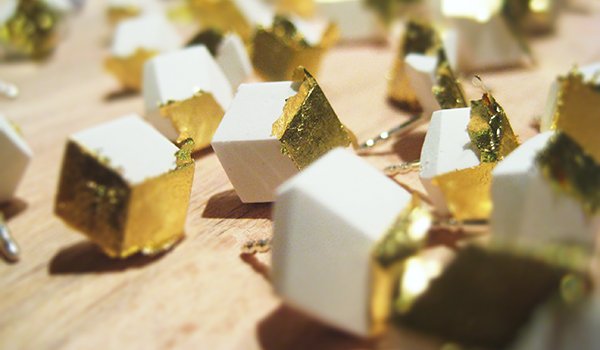 One creative challenge mastered, Gitte then had the difficult task of choosing a name for her business.  As anyone who has started a business knows, this is no small undertaking.  Today, one must compete for a business name not only locally, but thanks to URLs, globally.  “First, I had a list of 50 words and I googled each one to see if someone else had it,” Gitte says.  In the end, she selected Pictofactum, which she calls a “fantasy name,” something that came about by combining various words. Picto is derived from Latin for painting; and factum from the German word manufactum meaning “good stuff that you have for life,” as Gitte puts it.  Gitte’s Google strategy has certainly been successful: when doing a Google search for Pictofactum, Gitte’s business is the only thing that comes up.  Quite a modern miracle! 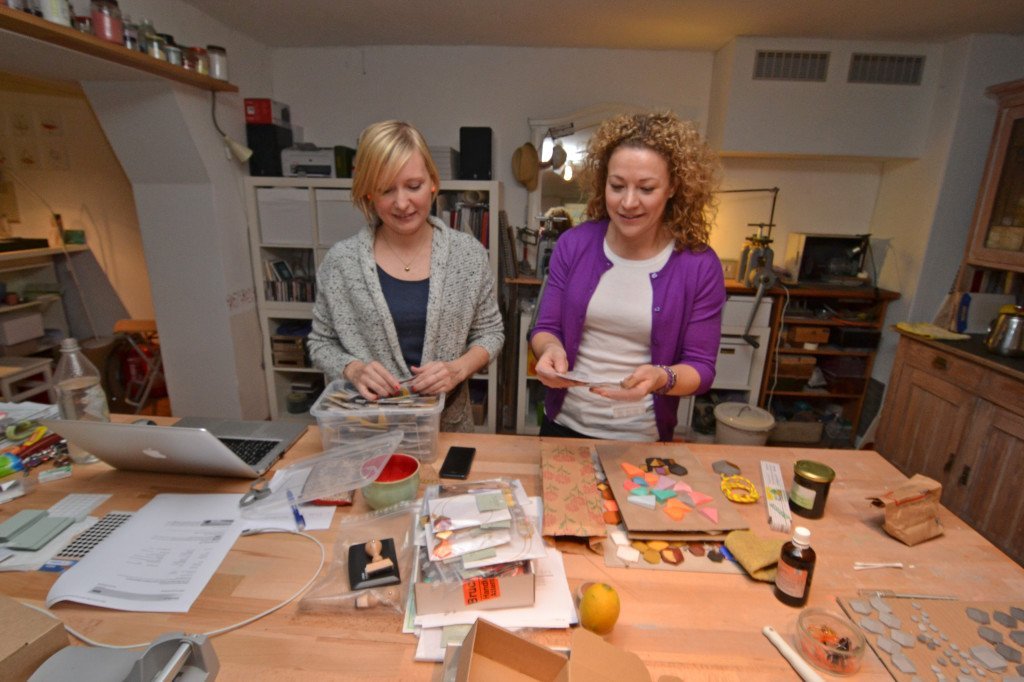 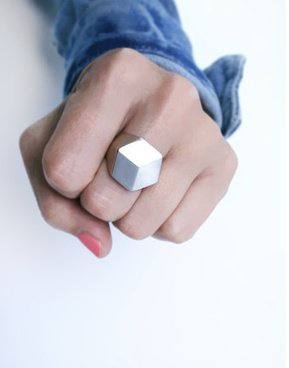 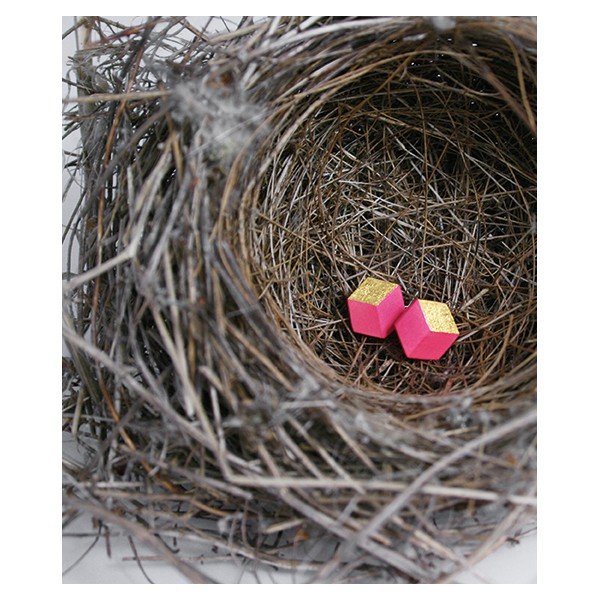 TO MARKET, TO MARKET

As Gitte began selling her geometric creations, she quickly realized that the market for wall art was relatively small and difficult to capture.  So she did some brainstorming.  How could she re-interpret her art to be more, well, sellable?  Perhaps the inspiration came from sharing a studio with a jewelry designer, but Gitte decided that she would try making producing her three-dimensional shapes in sizes small enough to be rings, earrings and necklaces.

One year later, here I am interviewing Gitte about her small but growing jewelry business.   Pictofactum is for sale in several shops in Berlin and Hamburg, as well as on Copenhagen-based e-store Parcellet and worldwide on Etsy.  Gitte also shows her jewelry at carefully selected, high-quality design shows around Germany, such as the show where I met her.  Gitte is eager to expand further but says, “ I want to sell internationally, but right now I don’t have enough time to expend on this [part of the business].”

Despite the work involved, Gitte tells me “every day I get up and I’m happy because I work for myself.  It’s really so much fun, I don’t want to work in a ‘normal job’.”

{Note: Although she has expanded into jewelry, Gitte still sells her geometric art.} 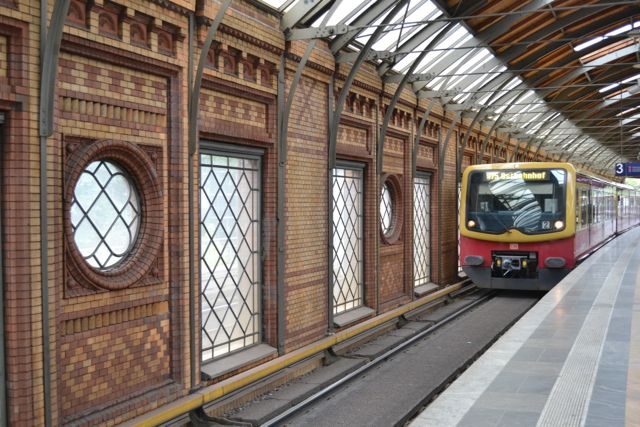 As a visitor to Berlin, I’m curious to get Gitte’s take on the German capital.  “I love the city.  It’s so full of life.  So many different people,” she tells me.  When I ask her if she has considered living anywhere else her response is swift.   “No.  Berlin is the capital and there’s always something going on.  But I’m still only 300 kilometers (186 miles) from [my childhood] home.”  She does, however, tell me that she enjoyed her time in Copenhagen during design school.  And later Gitte concedes, “I would like to live in New York [City]….for a year,” she says with a smile.

Then I ask a tough question: “if you had to pick one symbol that most represents Berlin – a person, logo, landmark, neighborhood, type of food, whatever – what would it be?”  Gitte thinks for a bit then says “Berliner Fernsehturm [the 1,200 sq. ft. tv tower located in the center of town].  Whenever you come into the city from the autobahn [freeway], the first thing you see is this!”

As we’re chatting a bit later, Gitte tells me that, like many Berliners, Gitte rides her bike to work every day.  “EVERY DAY?  Even in winter?” I ask.”  Gitte laughs and says, “yes, it’s very cold, but it’s a short ride.  [Just 10 minutes!]  Last winter I took the train only two days.”   With average highs below freezing and a much lower wind chill, that’s a testament to Gitte’s strength and determination!

*”I am a Berliner.”  Because she’s a female, Gitte is a Berlinerin.  A male resident of Berlin would be a Berliner.  {A little Deutsch lernen!}

Favorite neighborhood(s):  Friedrichshain (“where I live!”) and Kreuzberg.

Favorite Street: “Wühlischstrasse [in Friedrichschain].  It’s got lots of bars and is full of life!”

Favorite site(s):  (1) The Neues Museum.  “It’s so beautiful – the architecture and the exhibitions.”  (2) The Berlin Zoo.  “The aquarium there is really great.  And to the East is a nice park with lots of trees.” 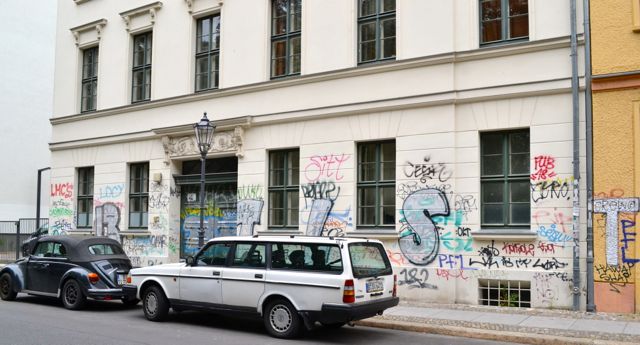 After a wonderful afternoon with Gitte at the Pictofactum studio, I’m giddy after being around such good energy.  And even am enjoying my Pictofactum earrings even more!  THANKS, GITTE!!!

And for those of you in Germany, you can visit Gitte (and check out the Pictofactum collection LIVE) at the Design Gift Markt in Hamburg, Sat & Sun, Nov 9-10!