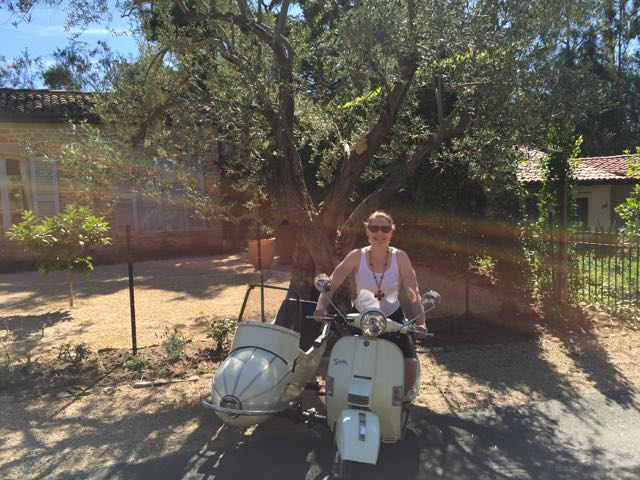 Montecito is one of those places that’s a little bit like fairy tale land. Like a Swiss Cottage in the mountains where a princess would live. Or like Nantucket or Martha’s Vineyard (although I’ve never been to either, but I’ve seen enough pictures and heard enough stories to know) or like the Hamptons (where I have been). It’s an enclave for people who are comfortable in their places in the world. For most (like the aforementioned destinations), it’s a part-time residence. Apparently, much like the aforementioned, there’s a “season” here. That season starts now and runs through the summer. According to my friend who lives in Montecito, small cottages go for $15k+ per month.

What drew me to Montecito this second time was actually not the city itself, but a gathering of friends. I was meeting a friend from college and New York City with whom I’ve been friends for…what? 20 years? She left NYC in January to move in with a boyfriend in nearby Santa Barbara and this was the first time that I had made it up to see her. We had reconnected earlier that week and so we set a date to meet just before a business trip took her back East.

{the patio at Jeannine’s, where steamed milk is always the answer} 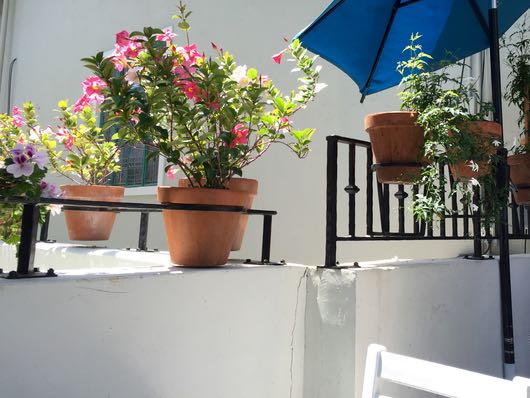 Well, it was indeed fortunate that we DID meet that day, because after we sat down to coffee, she told me that she had broken up with her boyfriend the day before and was leaving the next day for the East Coast permanently. After digesting the news over iced lattés at Jeannine’s (as one does), we headed to another friend’s house (she’s housesitting) for a homemade lunch of roasted chicken, Cesar salad and a sip of white wine.

The home where my friend is staying is certainly lovely. It’s decorated to the hilt in a style that is my favorite – traditional French country with plenty of antiques.   But it’s not stuffy – and there isn’t too much furniture. As my decorator (and house sitter) friend puts it, “the objects in the house need to breathe.” 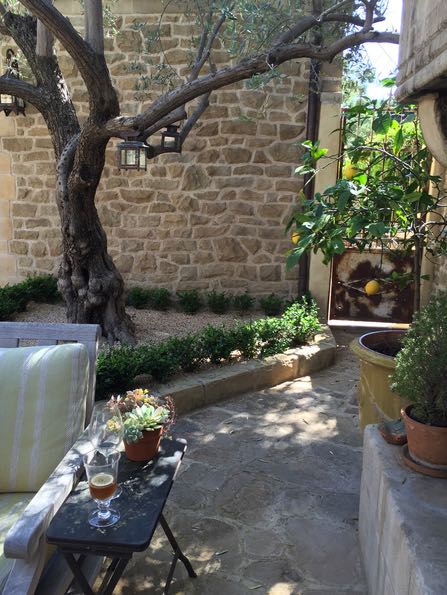 After lunch, we retired to the courtyard that is enclosed in a U-shape by the house. There’s a certain magic in lounging in the warm spring air surrounded by lemon and lime trees and experiencing the absence of noise. One of my favorite things about Montecito is its quiet. Not that there’s nothing going on in town – there’s fabulous shopping and eating – but the town is devoid (almost) of car horns and other noisy staples of city life. Part of that is because it’s a small town and people come here to relax and escape the cities. Montecito has a main street, Village Coast Road, and houses and small cottages are quietly tucked into the hill that climbs up from it. There are no tall buildings, only high gates and walls and plenty of trees and hedges. This certainly lends an air of exclusivity to the area, but it also provides for privacy and quiet for the residents.

{But is there anything to do there?} 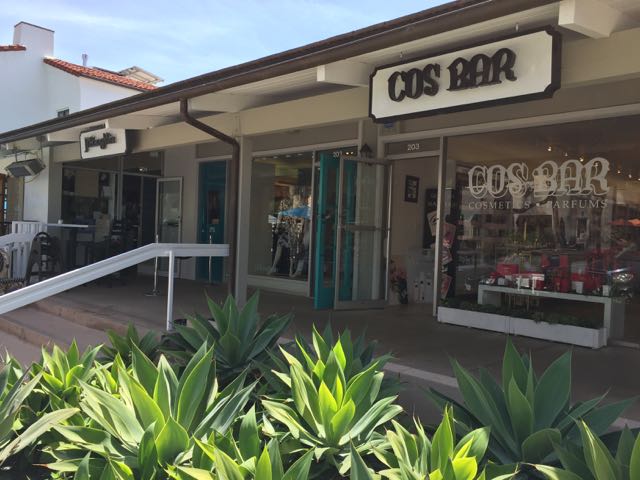 No destination is a hit with me unless there’s plenty of good shopping. Of course there’s a plethora of upscale shopping in neighboring Santa Barbara, including Saks and Nordstrom, but Montecito has its own charming little shops. There’s COS for upscale cosmetics junkies, J. McLaughlin for anyone looking for tried-and-true beachside preppy and one of my favorite stores, Maison K, which the owner, Kimberly, stocks with finds from her travels around the world – such as crocheted cashmere throws from Tibet, Astier de Villatte candles from France, hand painted champagne flutes, and clothing from designers like Grace Chuang (whose beloved fuchsia silk coat I bought at Takashimaya in NYC before it closed). And that’s just on one block!  Further up the road is one of Southern California’s Country Marts (from the same owner as that in Malibu), housing favorites such as Calypso St. Barth and Intermix, California chains such as Hudson Grace and the quirky, one-off Mate Gallery.

Given that I’ve only spent lunchtime meals in Montecito, I can only comment to a certain degree on the dining options. But I can tell you that there are several great casual options. (But then again, Montecito is a beach getaway destination, so one comes here for to be casual.)  For SoCal residents, there’s an outpost of the famous local chain Jeannine’s here (as referenced above, see ‘heartbreak’), as well as local favorite, The Honor Bar.  There are also great sandwiches and artisanal (of course!) ice cream in the Country Mart.

If you’re looking for a West Coat alternative to Martha’s Vineyard or the Hamptons, Montecito would work splendidly. And if you ever got bored in this small town, Santa Barbara is a five minute car ride away. 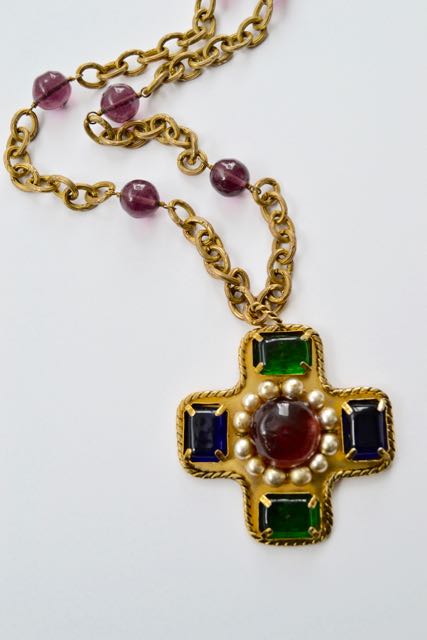 I chose to wear my 1980s Chanel “Byzantine” chain necklace for this occasion because I thought it fit Montecito, or at least the crowd in Montecito. (I use “crowd” here lightly because there isn’t much of one.) This tucked-away little gem is definitely a brand-conscious place and among all of the Chanel handbags, I thought a throwback piece of jewelry would be quite the coup.  I purchase my (so far) singular piece of Chanel at an antique fair in London from my favorite dealer.

NOW PERMIT ME TO DIGRESS…

Montecito also reminds me a little bit of Coco Chanel’s seaside haunt in western France, Deauville. The climate and architecture are quite different, of course, but the idea of a seaside escape for the wealthy is the same. I remember the first time I visited Deauville. It was during the summer between my first and second years of business school. I was living with my boyfriend (now husband) in a 300 sq ft apartment, of course with no air conditioning, in the crowded 15th arrondissement of Paris. It was a brutally hot day with plenty of humidity and no breeze and we had only a pathetic excuse for a park near us and no place to cool off (this was before we discovered the very cheap Paris municipal swimming pools) and so we decided to hop into my tiny car – a Volkswagen Polo Match, which is so small they don’t even sell it here in the U.S – and head out of town. I think we chose Deauville because we looked at a map of France and saw it was on the coast and since we had never been, we thought ‘why not?’  We chose to drive rather than taking the train because we weren’t sure how long a walk it would be from the train station to the beach and didn’t want to have to lug our towels, chairs and umbrella too far, nor find there were no taxis, or outrageously expensive taxis, at our destination.

We logged onto Mapquest (that was the thing back in 2010), plotted our route and set to it. Our day was a nice mix of beach lounging and strolling through the town. The town itself was replete with upscale retail – Hermès, Louis Vuitton, Chanel (of course!) and on and on, each in its own little thatched cottage in keeping with the original architecture of Deauville. We headed out of town before it got dark, so that we could still enjoy a bit of nightlife in Paris. As we were about halfway along the two hour drive on the route nationale, we noticed on the other side of the highway that traffic was clearing for a procession of special vehicles and a police escort. We debated what could be the cause until one of us, up on current events, remembered that President Obama was also headed to Deauville that day, for a climate conference or some such event. I reflected a moment as the sun set behind us, that it was pretty outstanding to call Deauville a last-minute beach trip destination, and make a visit with the president on our heels!

I hope to have those ‘Deauville’ times again before TOO long, but for now, I’ll have to settle for enclaves such as Montecito to keep me content.