I’ve always been fascinated by men’s high fashion. As much as I appreciate its grace and beauty, very few men would wear it.  Especially in the U.S.  But I do love men in scarves.  It comes partly from having lived in France (the land of the man-scarf) for two years.  When I was looking through some photos of the Louis Vuitton Men’s runway show for this season, I was struck by the exaggerated scarves being sported by the slender young men on the runway. 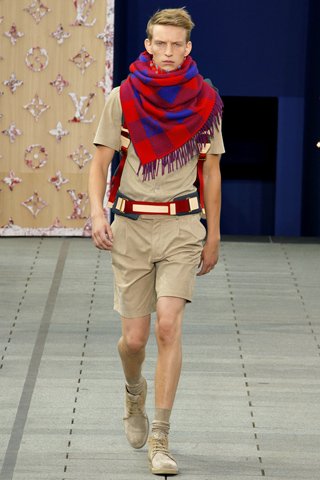 I couldn’t help but daydream a bit about getting my (very masculine) boyfriend into such a flamboyant accessory.  When I asked him about it (begged him to try it, for me), the closest I got was him to tie his (grey plaid) winter scarf into a bow tie.  Maybe there’s another neat fashion trend coming next season that he’ll try…