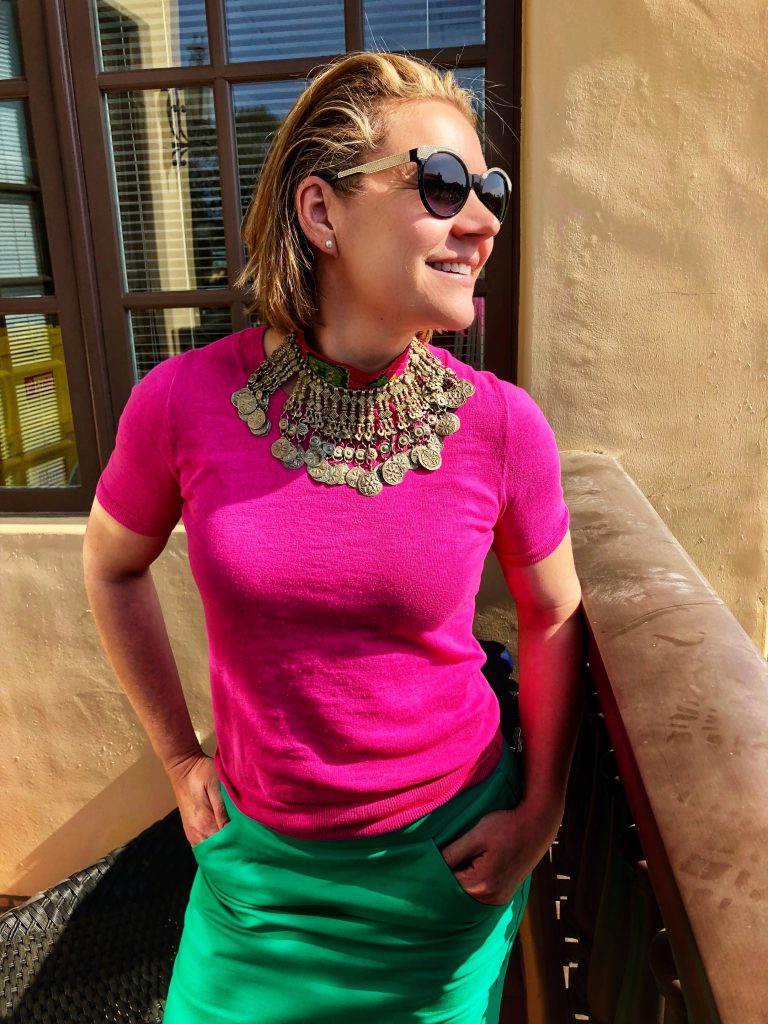 People say to me all the time “oh, I could never where that.”  My response is (almost) always “you could!”  I get it, it’s not everyone’s “thing”, but a lot of women don’t wear big, bold, “statement” jewelry because they don’t know how or they think it will look weird on them.  (It won’t.)  So part of my mission this month is to showcase these statement pieces and show that it’s not really so daunting.  I’m not a fashion icon, I generally wear basic clothes and I manage to pull these looks off.  (Or at least I think so…)

This piece would be considered especially tricky because it’s “ethnic”.   (I hate that term, but haven’t come across an alternative.)  I didn’t used to wear “ethnic” jewelry, or even particularly care for it.  That changed when I started traveling to the places where it originated.  My first ‘exotic’ trip was to Morocco. I’ve always been fascinated with Morocco.  Something about the desert, the mix of French and North African cultures, the architecture and colors, and the design aesthetic  that inspired designers like Yves Saint Laurent.  It was on that first trip to Morocco that I began collecting jewelry – as well as bringing it back to New York City and selling it to friends and colleagues.  Maybe the reason that I’ve been more brave in wearing ‘ethnic’ jewelry is because I was able to see it ‘in its element’, in the countries where it was designed first, and then could translate that to my lifestyle in the U.S. 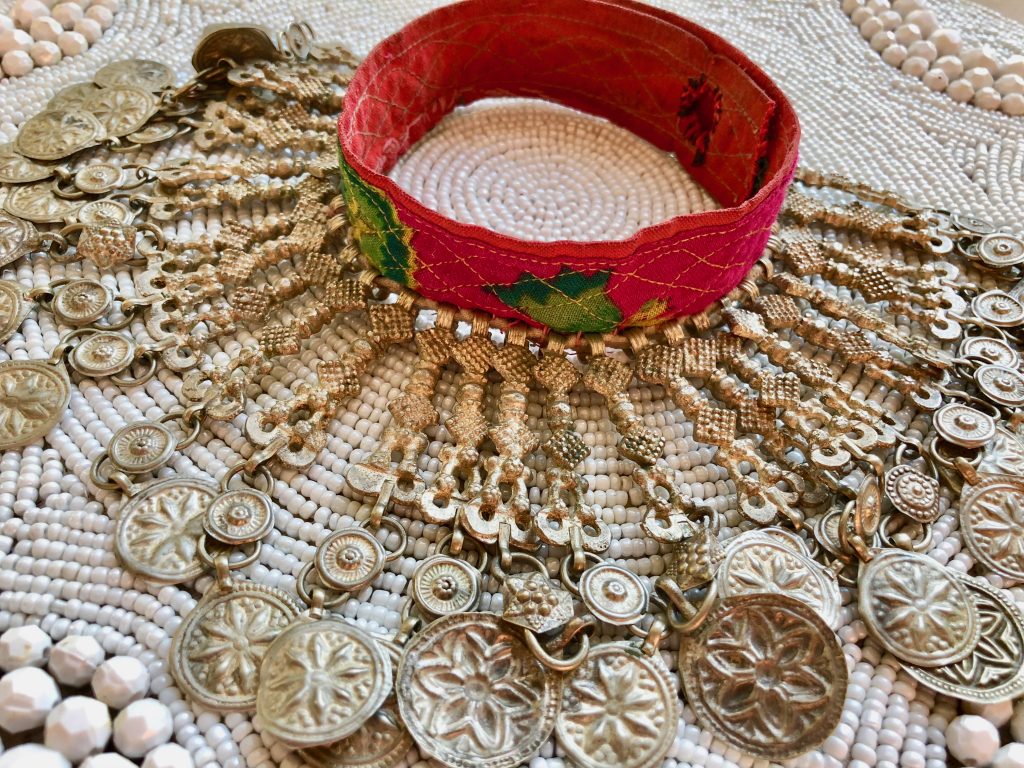 This necklace, though, is from a later trip.  My second trip to Istanbul.  I found such amazing jewelry there, and ended up making three trips in the space of three or so years.  I did my buying at the Grand Bazaar.  It sounds cliché, but they had such great pieces.  I wasn’t interested in modern Turkish design, because while beautiful, I could find this style and even some of the designers in New York.  What I was drawn to was what I couldn’t find in the US.  There were two distinctive styles that I identified.  One is what I guess I would call ‘polished ethnic’, or designs that are identifiable as Turkish (or Middle Eastern), but incorporated stones and colors that are often found in American and European jewelry.  You’ll see plenty of those pieces (and maybe already have) on my blog, but not in this post.  This piece falls into the second style of jewelry, which originates from Afghanistan and Central Asia.  I bought this necklace (along with several others) from two brothers who had (and might still have) a space in the Grand Bazaar filled with jewelry, rugs, swords (!?!) and all manner of metal trinkets.  I could never find their shop now, after all of these years, but when I was going to the Bazaar regularly, I knew all of the twists and turns to get there.  I originally found it with the help of the Turkish owner, Mike (his Western name), of the hotel my friend and I were staying at, The Kybele in Sultanahmet.

One thing that I love about this jewelry – jewelry from developing countries – is that it’s almost always handmade.  It feels good to wear something that another person poured his or her time and focus into.  It feels loved!  I also find that the designs can be really interesting because of the unique materials that are used.  This necklace is a simple strip of beautiful, bright fabric with pieces of metal and coins sewn onto it.  Very simple, but the effect is spectacular! 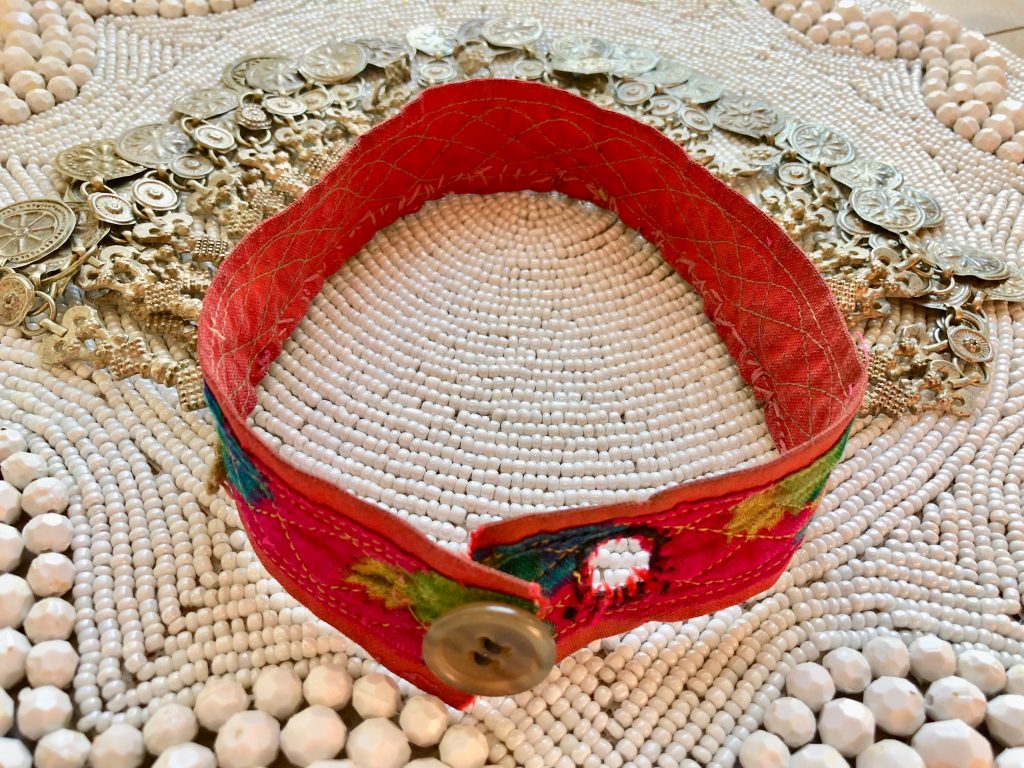 For me, the key to wearing jewelry that has a strong foreign aesthetic is to pair it with something very Western – like the J.Crew cotton top and skirt that I’m wearing here.  Jeans would be great, as would a very feminine, maybe silk, dress.  It’s the contrast that makes the statement.  You don’t have to wear a gypsy-like ensemble to wear ‘ethnic’ jewelry!!  I repeat:  wearing your regular, tailored, classic pieces with jewelry from developing countries is FABULOUS!!  And this way, you can show off your amazing pieces at the office, not just on the weekend!

I’m continuing with my big, bold jewelry this month, trying to get out as many posts as I can manage with a full-time job and family!